Many people in Marion don’t know that, from the mid 1920s to the mid 1950s, an area north of town was the location of an amusement park, Crystal Lake.

In 2019, Randy Winland published an excellent history of the park (available at the Marion County Historical Society), and I have used it extensively as a reference source for this article.

Unlike Randy’s book, which is a general history of the park, and in keeping with the theme of the Spooky Marion website, this article will focus on some of the more macabre and disturbing events that happened during the park’s 30 plus years of operation. I hope you enjoy it.

Located north of town on Route 4 just after the Route 4 / Route 423 split, Crystal Lake park was originally an outside swimming area set up by the local YMCA at the site of a disused limestone quarry.

The “YMCA Outdoor Swimming Pool” as it was known, formally opened on July 19th, 1922, and it quickly became a popular local attraction. Not only was the water exceptionally clear, but the Columbus, Delaware and Marion Electric Line interurban offered daily transportation to and from the park. (Interurbans were electric trams running at street level and between towns. Between 1900 and the mid 1920s, they were prevalent across the nation.)

By late summer / early fall of 1922, the Crystal Lake Park Company had taken over the swimming pool and in 1925 announced plans to transform Crystal Lake into a full-fledged amusement park that would include rides, upgraded swimming facilities and a huge dance pavilion.

Among the new rides, one of the most popular was a roller coaster called the Zip. Unfortunately, the Zip was also involved in Crystal Park’s first death.

According to an article appearing on June 19th, 1925, in the Marion Star, 18-year-old Leonard Hoffman and his cousin, 18-year-old Roxalena Garcelon, were catapulted from their seats while going over one of the smaller hills. Leonard later died of multiple injuries while Roxalena survived.

To make matters worse, their accident was witnessed by Leonard’s older brother, Arthur Hoffman, who was sitting in the rollercoaster car behind them.

Arthur later told reporters, “When the car coasted into the platform, I jumped out and ran back to the scene of the accident. A huge crowd had gathered. Leonard and Roxalena were just being placed in automobiles when I broke through the crowd.”

How Leonard and Roxalena were thrown from the Zip was never definitively established, though according to Winland’s book, “Witnesses reported that [the] riders has loosened their safety belts once the ride began.”

Man (Literally) Loses Eye on the the Zip Roller Coaster

Another far less tragic (though nevertheless bizarre) incident occurred in June of 1929. The Marion Star reported that a man “seated himself…in the roller coaster at Crystal Lake park the other night, and when the end of the ride came, he opened his eyes and one was gone.” 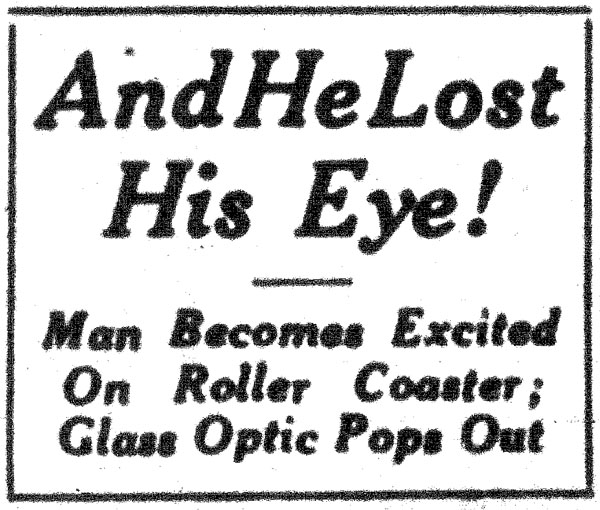 It seems the man had a glass eye and, during the excitement of the ride, the artificial one popped out. Fortunately, one of the ride operators eventually found it in the bottom of the roller coaster car.

Through the 1920s, Crystal Lake continued to draw large crowds of people in search of a good time. Unfortunately, though, it also drew a despairing few who were intent on ending their lives there.

On March 22nd, 1926, Dick Bruun, a successful local businessman, borrowed a car from one of his employees at the Dick Bruun Ford Company where he was president. When Dick didn’t come home for dinner that evening, his wife became worried and organized a search party.

That evening a Crystal Lake employee informed the sheriff that a car matching the one Dick had borrowed was parked at the front entrance of the park. Not long after that, searchers found Dick Bruun’s body in Crystal Lake. The initial assumption was that he had drowned, but the coroner later determined that the shock of jumping into the cold water has caused his heart to fail.

Although the Marion Daily Star reported that Mr. Bruun had left two notes behind for his wife, the contents of the notes were not made public. The Star reported only that he had been experiencing “great mental strain”.

In December of that same year, an 18-year-old man named Carlton Virden went missing. According to a December 4th, 1926, article in the Marion Star, his abandoned car was eventually located on one of the park’s driveways. A note lay on the front seat. It read:

“A purely suicide act because of excessive worry, blame no one except myself. Everyone tried to make it pleasant for me but it was useless. Carlton.”

Although investigators assumed he had committed suicide by jumping into the freezing water of Crystal Lake, they were unable to find his body.

As the weeks rolled by, people around town began to speculate that he may have killed himself in another location or had even skipped town and started a new life elsewhere.

A Marion Star article appearing on January 7th, 1927, stated that the case was no closer to being solved than it had been on “the day after the youth was reported missing.” In any case, Crystal Lake had by then frozen over, and if Carlton Virden’s body was submerged somewhere in its depths, investigators would have to wait on warmer weather to look for it.

Finally, on May 7th, 1927, more than five months after his disappearance (and with the swimming season fast approaching), Carlton Virden’s body was discovered in the northeast part of the lake.

While the Depression, which began with the stock market crash in 1929, hit amusement parks hard (Winland states that the number of amusement parks declined from 2,000 in 1930 to just 245 in 1939), Crystal Lake was able to remain open. In 1932, the Crystal Lake Park Company announced it was leasing the dance pavilion and swimming facilities to C.J. Utoff of Toledo. The rest of Crystal Lake – the rides, the concessions, the games – would all be sold off. Although Crystal Lake hosted a number of dance marathons at the dance pavilion in the early 1930s, roller skating largely replaced dancing during this time.

Though now more modest in size and offering less in the way of entertainment, over the course of both the Great Depression and World War II, Crystal Lake continued to be a place where the people of Marion could swim on hot days or skate (and occasionally dance) on warm nights.

Unfortunately, it was during these years that Crystal Lake was the site of yet another suicide. According to an article appearing in the Marion Star on October 11th, 1943, the body of 50-year-old Mabel Heil was discovered in Crystal Lake. In the days leading up to her death, Mrs. Heil, whom the Star reported as being “despondent over ill health” had remarked to family members that she often thought about going to Crystal Lake and putting an “end her troubles”. Sadly, no one in her family had taken her threats seriously.

The End of Crystal Lake

In 1949, the Crystal Lake Amusement Company bought Crystal Lake. Perhaps in an effort to capture some of the park’s original magic, the new owners added amusements like skee-ball courts and dodge ‘em cars and pony rides. These efforts, however, were short-lived. By the next year, swimming and roller skating appeared to be the only leisure activities being offered at the park.

By the early 1950s, Crystal Lake had begun hosting surplus sales during the summer months in tents on the southern portion of the property. In 1953, when the roller skating rink closed for the season, these sales continued in the skating rink. The Crystal Lake Bargain Center, as it was known, was the first use of the former dance pavilion as a retail space, and it was a sign of what was to come.

In 1957 Hyman Ullner and Hyman Swolsky, two Ohio businessmen, bought the Crystal Lake property and set about converting the dance pavilion into the Crystal Lake Bargain City, a shopping center. Two years later, when it was apparent that the former dance pavilion was no longer sufficient for their needs, the owners decided to construct a new Bargain City on vacant land south of Crystal Lake. Construction began in the spring of 1968 and the store opened in November of that year. In 1975, the former dance pavilion burned down. As Winland writes, “All that remained of what had once been an entertainment showplace were the…waters of Crystal Lake.”

In 1979, Bargain City, which was now more commonly refereed to as Rink’s Bargain City or just Rinks, moved to a new location on Marion-Mount Gilead Road. The former Bargain City building left behind on Route 4 is still in commercial use. The rest of the Crystal Lake property is now a private residence.